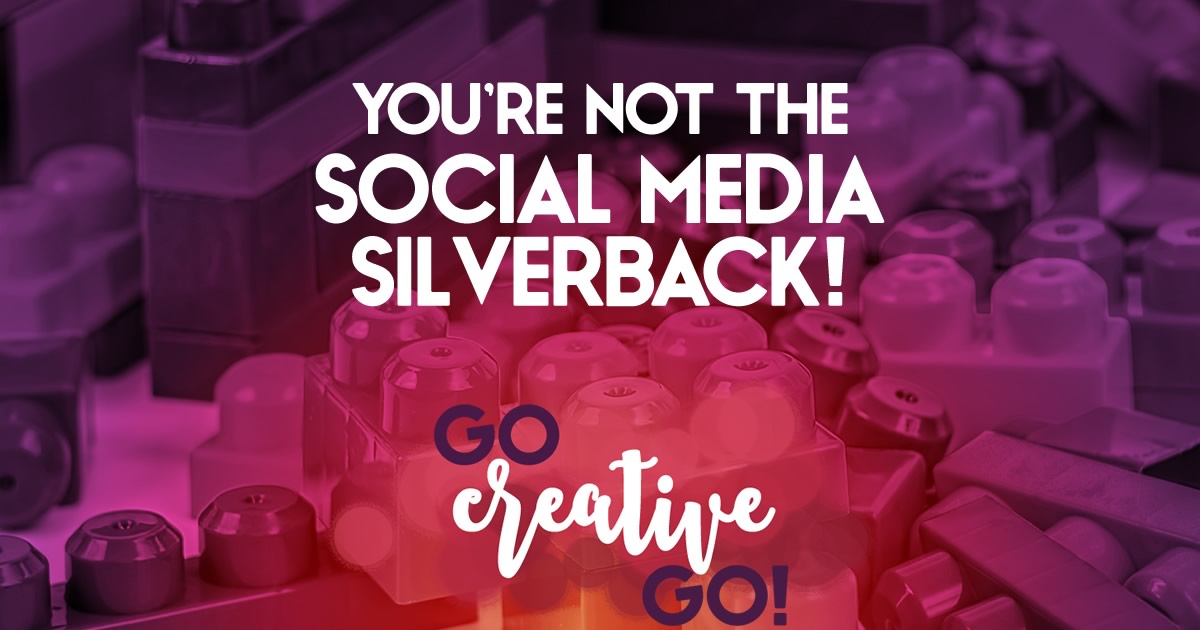 Have you ever been involved in a discussion, via a social media channel – maybe in a Twitter chat or in a Google+ post, when a single party decides they’re running the show and will slap down any detractors?

If you haven’t experienced this, you’re lucky. And I dare say your jig is up. It will happen soon.

I’ve coined a phrase for that type of behavior: Social Media Silverback Syndrome

noun sil·ver·back ˈsil-vər-ˌbak
: an older adult usually dominant male gorilla having gray or whitish hair on the back

In gorilla society, the silverback rules all. He decides the pecking order. He decides where the group sleeps at night, where they go in the morning to forage and he gets to mate with all of the ladies.

The silverback rules with an iron fist, and he’s quick to raise the fist at any signs of dissent in the ranks. He chases and chastises those that don’t do his bidding in a timely fashion.

For the silverback to fall a more dominant male must beat him in battle.

Unlike gorilla society, the silverback isn’t always the oldest, strongest, most dominant (has the most followers, the most shares, etc.) member of the group.

Leave Your Alpha Male (Or Female) Attitude At The Door!

Don’t reprimand those you feel are beneath you in the social order. You’re not the dominant male (or female) of Google+ or any other social channel.

It’s perfectly A-OK hunky dory for you to disagree with a post or discussion topic. It’s not at all acceptable for you to intimate that any individual taking part in the dissenting side of the discussion, “doesn’t know what they’re talking about.”

Your opinions aren’t facts, even if you believe you have the numbers to back them up. Opinions are often about feelings and personal preference. You’re allowed your feelings, I’m allowed mine. We may not share the same feelings. And that’s okay.

It’s not okay to tell someone their opinion, their feeling, is incorrect, outdated or stupid. Especially in a public forum. This kind of chest beating bravado has no place in a social media discussion.

NOTE: This advice goes both ways. If you post up a topic for discussion, you should expect just that. And discussion often brings around dissenting opinions. Don’t post an opinion if you’re not ready and willing for that opinion to face some friendly debate.

Want to try to sway them, though – like you, they’re adamantly standing their ground? Take it private!

Don’t get me wrong, I love a good dissenting opinion. I love the chance to openly debate. Go ahead and engage in discussion, even heated discussion. But you’ve got to be open, honest and direct. And you must be able to agree to disagree!

And here’s one just for the fellas! Stop correcting the womenfolk when they use “feminine” terminology which you feel “degrades” your vaunted and lofty position within your industry.

I see this kind of behavior far too often in Twitter chats. A single individual attempts to shine the spotlight on themselves, struggling to show themselves the expert on any and all topics discussed.

It doesn’t matter that, generally speaking, the chat organizers have invited a specific individual to play the role of expert. These tweetchat tyrants are intent on one thing – proving that they are more knowledgeable than anyone else taking part in the discussion.

They create their own mini-chat, usually drawing a small handful of attendees away from the intended discussion, trying to add to their own clout and following.

Want your chance to shine as the undisputed champion of the chat? Ask the chat owner if you can co-host a future chat. Dive into the discussion and embrace the group, don’t detract from it.

Corrections Can, And Should, Be Shared Privately

Occasionally you’ll see a typo, improper word choice, a link to an outdated stat or some other small error.

If your intent is to help, then it’s perfectly okay to point them out, PRIVATELY.

Take it to a DM, PM or to an email message.

It’s time to put the hammer down on the power play that is the public address of simple errors.

Beware, Too, The Marketing Matriarch

Stepping away from the gorilla example, I want to look at elephant society briefly.

Elephant packs (are they packs?) are led by an elder female. It is her job to memorize the paths to watering holes and places to forage for food. Survival of the pack depends on her getting this right.

Social media packs are different. It’s not simply survival of the fittest. It’s about adapting to the lightning fast changes in reach and engagement and understanding what works for your specific audience.

Occasionally you’ll see the marketing matriarch. This is the old school influencer, holding on tight, with both fists – and possibly her teeth, to past influence and marketing mojo, despite that fact that all around her (or him, though matriarch and male aren’t a match) have moved on. Even more occasionally these matriarchs stand their ground by calling out anyone and everyone that disagrees with them, throwing around the overused and very abused  “hater” moniker.

AGAIN … KNOCK IT OFF!

If you can’t stand the idea of new ways and new mediums, I dare say a career in social media wasn’t a smart choice. While it’s fine to stick to your guns if they work for you, it’s not fine to put under fire anyone who simply dares to disagree.

How Do You Handle Discussion Dynamics?

Strong opinions and social media marketing go together like peanut butter and jelly! Have you ever gotten into a heated debate or discussion? Have you ever felt bullied or slapped down?

It happens to all of us, sadly.

But if you can hang in and remember that opinions are like a-holes, you’ll be able to finish the “fight” with aplomb. Simply state that it’s time to agree to disagree and you can hold your head high!

SHOCKER: Your Business Website IS About YOU!
Scroll to top