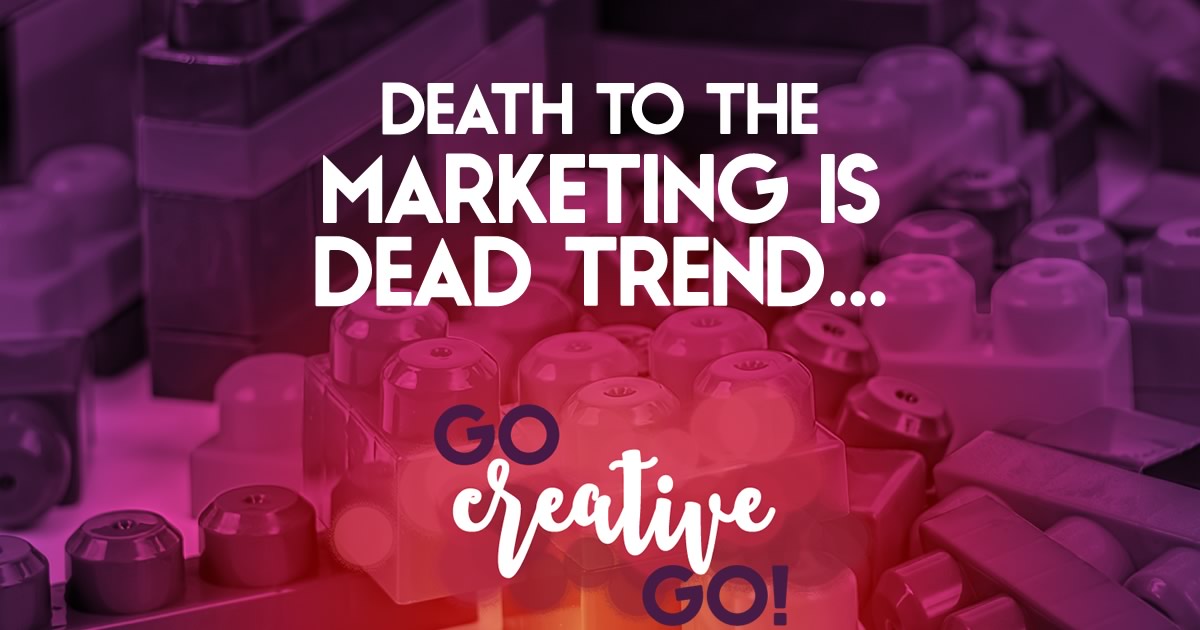 Do you ever feel like you’re surrounded by drama? I’m sure I do my fair share to create much of the drama that surrounds me. You certainly can’t publish snarky sentiments and expect to get off drama free.

But I often find myself scrolling through articles, mostly via Feedly or another RSS gatherer, wondering why we have to go for the dramatic when it’s less than necessary.

Is it just me, or do an awful lot of marketing articles tap into the idea of killing something? And, if not that, then they’re talking about the impending death knell of a practice we’ve all come to hold dear. Anyone else notice that? Just me?

Why do we feel the need to pronounce currently accepted and still valuable practices dead in order to be provocative? Every time I turn around I’m bombarded with another announcement of imminent death…

Okay, I admit it. I may have gone just a bit too far with that last fake headline. But I know plenty of you have seen these pronouncements populating your feed of late.

While I’m all for taking off the rose-colored glasses and looking a bit deeper to see the two sides that make up every story, I have some problems with this Chicken Little, “the sky is falling” mentality.

Several problems, actually, and what better way to share them than with a dose of my patented Simmer Down Sassy Pants snark and sass.

#1: They Tend To Be Ridiculously Premature

People have been writing about and lamenting the death of Photoshop for years. It was not too recently ramped up with the launch of Canva, the supposed “democratizer” of graphic design – seriously don’t get me started, that’s another rant entirely – anywho … where was I, oh … the death of Photoshop.

It’s not going anywhere anytime soon. Derek, my husband and partner in Go Creative Go business crime, still uses it every day. While I was never a big Photoshop fan, I’m still using Fireworks on a several times per day basis. FYI, Fireworks is another image editor/creator, optimizer owned by Adobe.

Photoshop is still available and still being updated by the fine folks at Adobe, though it’s now a cloud-based product. And, I see articles and tutorials published almost every day by fellow graphic design enthusiasts.

There’s no reason to jump ship quite yet!

Someone told someone else that provocative headlines were the hot ticket. Content marketing with catchy titles is the way to go.

Sure, the occasional provocative title will gather eyes for your well-written (we hope) content marketing prize. I’m not categorically against the pithy, the provocative. As a matter of fact, the title of this article could very easily be described as provocative, and, YES, some could say it detracts from my point. Maybe! Kinda!

Gimmicks are great in the short run, but if you don’t deliver on what’s promised they won’t reap you any rewards.

A catchy title that draws eyes CAN be great. But if those eyes aren’t delivered the promised goods and ideas, you’ve possibly lost a reader. Possibly a prospect. Maybe even a paying client!

Bandwagon jumping is often the first sign that someone’s run out of creative mojo. When we’ve lost the ability to create something relatively new and targeted, we fall back on the standbys. The gimmicks. Click bait. Eye candy.

Again, there are times when a provocative title draws eyes to a real prize. A well crafted, ideas-full article or other form of content (podcast, infographic) that packs plenty of punch and generates real discussion.

There are some great “death to” articles that are absolutely on target and worthy of the shares the title generates. But it’s become too easy to add the word “death” to a title, and then fail to deliver on the expected punch and pithy entendre.

It’s at that point when the uninspired ruin a tactic that can be quite effective.

Death is, for all intents and purposes, permanent …

Yes, we could certainly discuss many a religious belief to the contrary, but work with me here.

Digital marketing, social media marketing, content marketing … each is equal parts fleeting and permanent. Permanent in that someone can always take a screen cap and reference your past foibles. But fleeting in that new ideas, influencers and best practices crop up every day. Dare we say every hour?

Let’s not bring pre-mature death on anything that remains useful, even for only a margin of our audience. Let’s, instead, consider how to bolster what’s flagging, how to revive what’s grown a little tired, and breathe new life into tactics and practices before we relegate them to turn to dust and blow away.

Your Content Is The Rhythm Section Of Your Brand!

Choose A New S-Word: Let’s Say So Long To Sexy!
Scroll to top