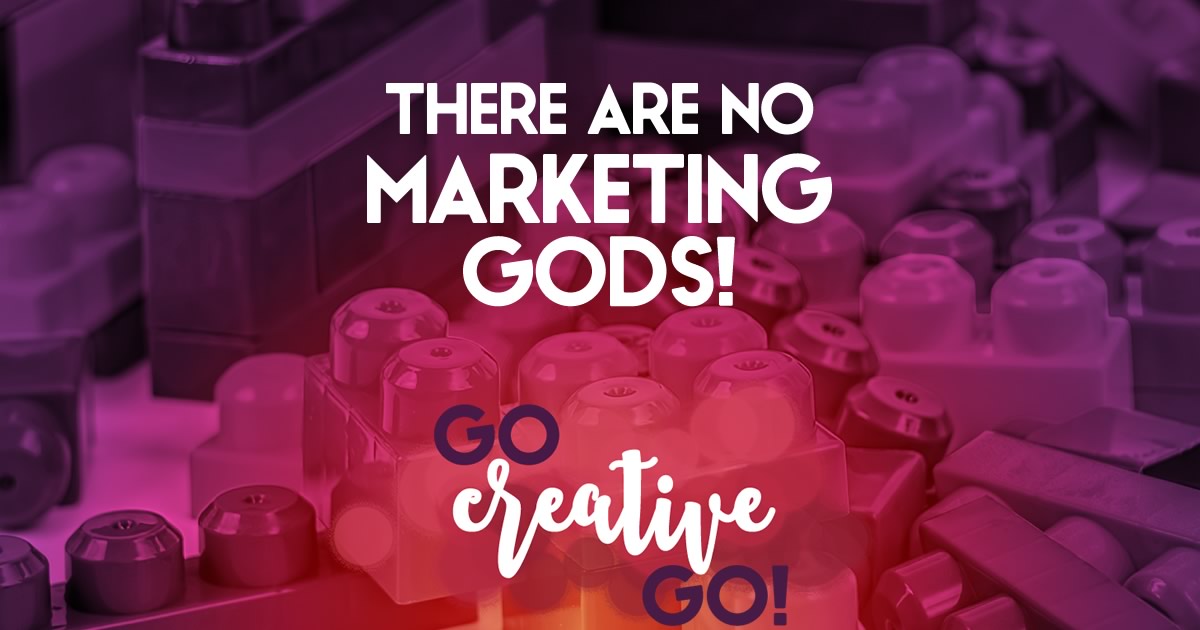 When it comes to marketing, there are of course many people we look up to, from whom we wish to learn. We all have our own marketing icons, individuals we think of as influencers, even powerhouses.

But are there marketing gods? No!

I often read articles, disagree with them, and store them for future use as article fodder. I’ve been sitting on this topic for a while, waiting for the impetus to really let loose. Today feels like the day.

First things first, let’s take a quick trip to one of my favorite sites, dictionary.com, in order to understand two of the key words I intend to use to debunk the gods of marketing myth.

1. almighty or infinite in power, as God.
2. having very great or unlimited authority or power.

1. having complete or unlimited knowledge, awareness, or understanding; perceiving all things.

While the gods may be all knowing and all powerful, the human beings, not so much. And marketers are, indeed, human beings, no matter how often we might think that certain members of that industry are actually robots!

All Powerful? I Think Not!

While many a marketer has managed to spark lightning with an idea, to make a thunderous statement, even to create a tidal wave with a post (going viral), none have the ability to make it so every time they share a thought. You’re not Thor. You can’t actually call thunder and lightning at a whim.

While sometimes circumstances and luck work together and something we hope will go viral actually does, no marketer has the power to “make viral happen” through sheer will or intent.

Consider, if you will, the head of the Greek pantheon, Zeus. The dude had a temper problem and his jealousy often got the better of him. Marketers aren’t immune to these failings, either.

But, because Zeus was a god, he could get away with his failings. His anger even managed to make him more powerful.

But when a marketer loses his/her cool and makes a rash decision, it doesn’t add to allure and power. It, instead, results in admonishment and even embarrassment. How many times have you seen a marketer lash out, only to be lambasted by their followers and anyone else drawn into the embarrassing spectacle.

The gods could get away with stupidity because of that all encompassing power. Marketers, not so much!

Even Experts Don’t Know It All!

It’s time now to take a look at the all knowing side of being a deity.

Let’s look at Athena as we dissect this. She was a serious bad ass. But she often had to make unpopular choices to achieve her end goal. She could do so, because of her omniscience. She knew what the end result was before she took the steps to get there.

We mere mortals, I’m sad to say, don’t have this ability. We certainly can plot out the steps in order to reach a goal, and we’re often successful. But we can’t know with certainty that each goal will be met, not at the outset. Goals and results aren’t synonymous. Sometimes they just don’t synch.

When marketers make unpopular choices, even with a positive end goal in mind, we lose audience. Why? Because we’re not all powerful, and fear as a motivator just doesn’t work the way it used to. Because we can’t see the end before we’ve launched the beginning, we have to be very careful.

We’re not deities and our failures can’t be quashed so easily. Instead, they are openly discussed, often lamented, even more often lambasted, and they can follow us around forever. I don’t know about you, but I can’t throw a detractor into the sky and make them a harmless constellation. You?

No Marketer Is Immortal

The gods had one crucial weapon that we marketers simply don’t have in our arsenal. Immortality.

We all have a shelf life, especially if we are unwilling to grow, change and adapt with our environment. Marketing, especially in the digital sphere, changes at quick speed. What once worked well, is often mere months, even weeks, later a waste of time and effort.

Many marketers who were HUGE names as little as five years ago, are now hanging on to their popularity with all they’ve got, because the platforms on which they built that popularity are not immortal either.

And when a marketer, big name or small, big name or relative unknown, makes a big time mistake, there’s just not enough power or knowledge to get them through the backlash completely unscathed. Followers are lost, shares decrease, book sales drop, etc.

Fickle, Thy Name Is Human …

I’ve often said that if we all liked the same things the world would be a very boring place. Our opinions matter and those opinions help make many a marketing name popular. Those same opinions, though, can topple a one-time great to the bottom of the heap.

Marketing, by nature is fickle, as are the eyes we hope will land on our marketing prize. We can’t guarantee a win every time. Brand advocates can become brand busters in a flash.

Putting a marketer on a pedestal can hurt both the marketer and those looking up to him/her. We all wobble, sometimes we topple, and sometimes we flat out land on our ass.

We’re not all knowing, and we’re certainly not all powerful. We have to be ready to turn around on a dime. That’s hard to do when we’re atop a pedestal expecting glowing accolades and sure support.