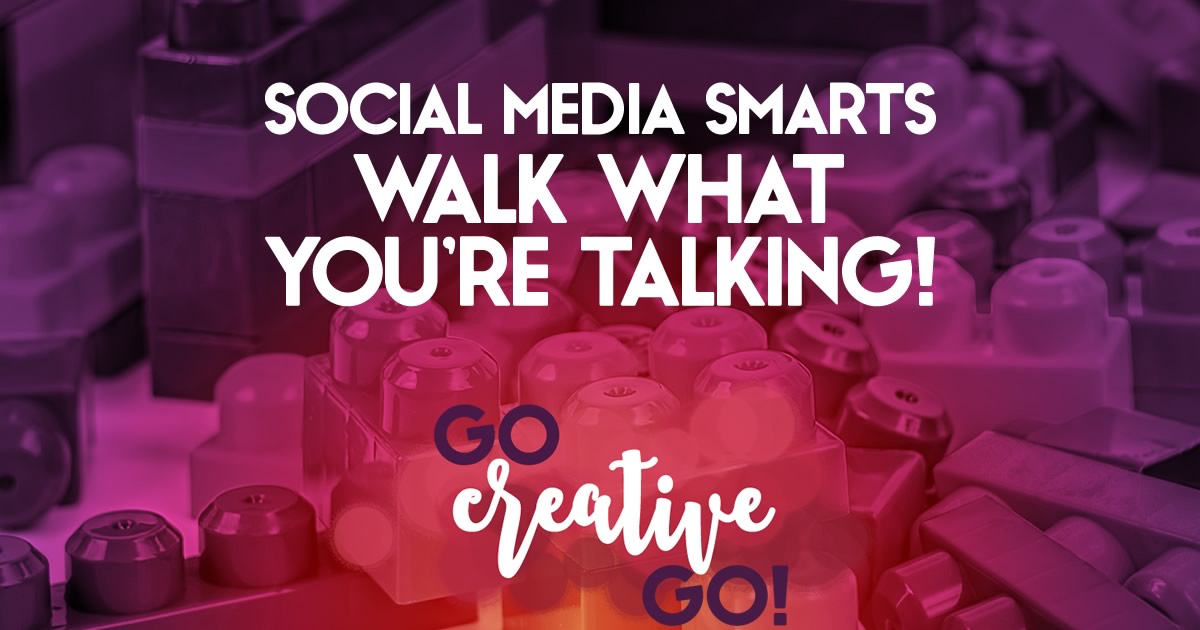 I fairly often write about the idea of walking the talk. It’s a concept that many a social media and digital marketer has looked at and discussed. Each month we’re bombarded with new and increasingly ridiculous ways to get ahead and fast and easy. There’s no fast and easy when it comes to building a solid and smart presence online. If you fail to walk the talk and choose to engage in less than legitimate practices, it will follow your brand and your business like a dark cloud for some time to come.

That being said, why are so many new and even established social media marketers drawn to these shady tactics? I’m sharing a few of my thoughts with you today.

They’ll Never Notice | Those Rules Don’t Apply to Me:

Though I probably shouldn’t be, I am still shocked to see how many supposedly socially savvy “names”, be they big or small, feel that there’s nothing wrong with blatantly ignoring the unwritten rules of social engagement. It’s not as blatant as it used to be, of course. Remember, way back when, all of the ridiculous ruses to add contact information to cover images on Facebook? Right? Wrong. Those pages lost my like. Did that impact them much? Probably not. But I see the same things happening lately, whether it’s blatant disregard to stated terms of service or individuals simply engaging in gray area, murky tactics that leave many a marketer with a bad taste in the mouth.

Consider this. Daniel Newman of Millennial CEO recently launched a discussion regarding the practice of tagging a multitude of followers in posted memes and motivational quotes. This isn’t a photo in which any of these individuals actually appear. It’s generally a quote layered over stock photograph or a cat or dog meme. While I admit to not being a big fan of either kind of post in general, I’d not take offense if a colleague or peer chose to cater the occasional meme post to me.

And there’s the problem. It’s not catered to me or occasional. The individuals who engage in this practice do it daily, if not multiple times daily, and they randomly tag as many of their followers/friends as they possibly can. Why? Reach. Pure and simple. Which is? Selfish! Pure and simple. You’re not looking to reach out to me with a thought. You’re looking to increase the likelihood of your post getting seen. It has nothing to do with me. In this instance, you’re using me and everyone else you tag as a tool. Not cool.

Too many unwritten, but well understood, rules are being ignored. And certainly not just on Facebook. The tagging things happens on Instagram, A LOT. And there’s my favorite, the asinine auto-DM. How many times do we need to write about the woes of idiotic automation? Twitter isn’t the culprit, you are.

I’m A Little Guy So It Won’t Hurt Anyone:

Remember all of the contest criminality in Facebook’s past. Sadly, many a marketer didn’t learn from that. Contests continue to be a gray are where tawdry tactics taint what the sanctity of social. Pinterest has rules. Instagram has rules. Why can’t certain individuals play by those rules?

Looking beyond contests, let’s consider spam. I’ve been delivered a rash of ridiculously spammy messages on Linkedin lately. When did that become acceptable? It hasn’t!

I too often see newer social media marketers engaging in these tactics, hoping to get ahead. It’s not easy to get started in this business. When you have a low follower count, you might not be seen as the real deal by many who call themselves social media experts.

But is cheating or gaming the system really gaining you an edge? Thinking that you’re small and no one will notice if you engage in less than smart and savvy marketing practices is silly. Nothing on social ever really goes unseen. What happens if someone you really admire, someone you’d like to work with, sees what you’re doing? You can’t do anything that will make it unseen.

How often do we see big name experts with tens of thousands of followers who only follow a minuscule 2-300? I see it all the time. What do I “see” when I see this? I see someone who doesn’t see much value in keeping abreast of the thoughts of others. I see someone who is interested in broadcasting their own content and ideas rather than sharing the best content and ideas with their followers. I see someone engaged in a one-way broadcast rather than taking part in a conversation, someone interested in shouting rather than listening.

Love for Sale | Also Known as Back Scratch Fever:

Likes, connections and the act of circling aren’t commodities to trade like baseball cards or beanie babies. I can’t tell you how many times a day I see something resembling this statement in my feed or in private messages:

I have just liked/connected/circled you, and I would really appreciate it if you would return the favor.

Yeah, ummmmmmm, your business and, thus, your online presence is all about parakeet grooming in Redwood City, CA. I have three cats and I live in Tucker, GA. Where’s the draw, the value, the impetus for me to like your page? And if I was even slightly intrigued, that message, which is basically begging, would quickly change my mind.

Reciprocity does rule in social media marketing, but there’s a right and a wrong way to go about it. There are no favor connections. Real reciprocity requires social savvy and smarts on both sides of the relationship, as well as mutual respect. I certainly don’t respect messages like the one above. Who would?

This behavior shows up on every platform, so there’s really no hiding from it. It showcases itself in a variety of ways, including:

My little list barely skims the surface. So come on, help me “fill in the blanks” a bit. What gets your goat when it comes to the “names” that seem more intent on remaining a name than in actually working within the proper social circles. Everyone loves an opportunity to clear the air and even get a little rant on, so have at it!

In closing, I continue to remove the “Like” from a lot of Facebook pages, unfollow a lot of Twitter accounts and even disconnect from a handful of Linkedin accounts. Did my own numbers plunge? Nope. On the contrary, they’re rising – even on Facebook! People like seeing someone take a stand, even a small one. If we each take these small stands, we will “save” social. If we all walk the talk, every day…it’s going to get us to a valuable and viable destination.

Smarter Marketing: Say No To Shortcuts!