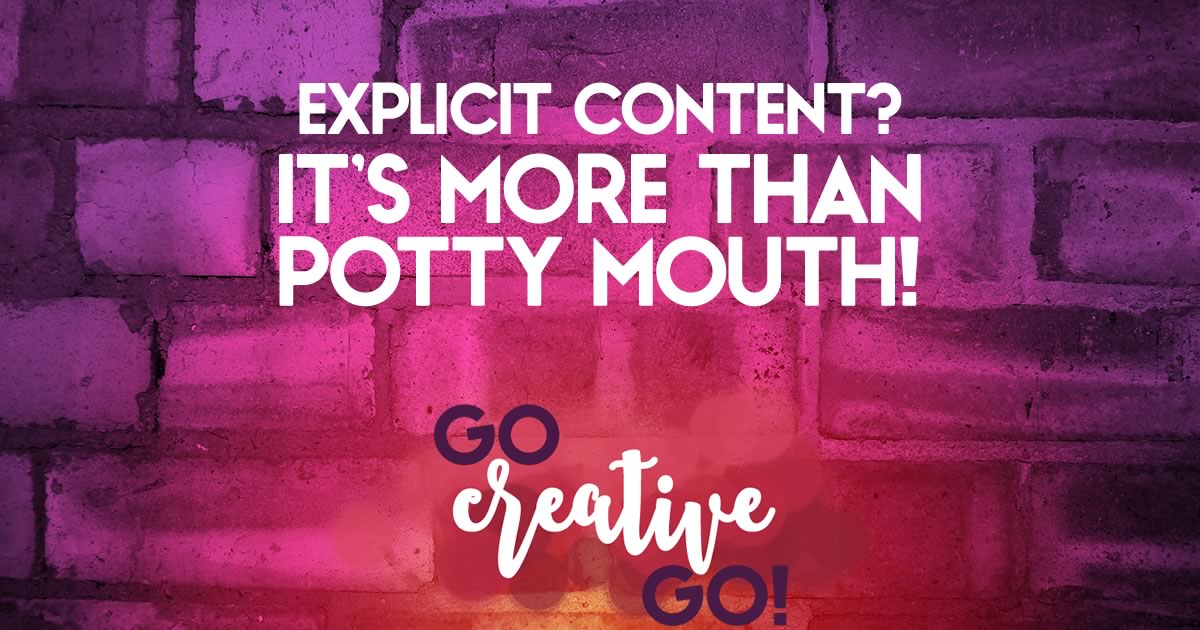 The title’s correct! It’s not link bait to draw you in then leave you disheartened, distrustful and disappointed.

I am ACTUALLY writing about explicit content today, especially as it pertains to the launch of my new podcast: Ready, Set … PODCAST!

Every once in a while you see an article making the rounds across the blogosphere and social media feeds. That article calls out the use of explicit language in blog posts and marketing materials. Such language is:

Did you know that if you look up explicit in the dictionary, there are few, or sometimes – NO, references to potty mouth or swearing?

One of my go-to sites, Merriam-Webster shares:

1 a : fully revealed or expressed without vagueness, implication, or ambiguity : leaving no question as to meaning or intent
b : open in the depiction of nudity or sexuality

4 : of a mathematical function : defined by an expression containing only independent variables — compare

While my writing style might give off a resounding WTF vibe, I rarely drop F-bombs. In fact, the only time I do is when I hurt myself in a stupid fashion. You know, walking into the door jamb, stubbing my toe, whacking my head on a low, open cupboard door. That kind of thing.

Most of the time, any explicit language you see on my posts is my own made-up alterations to commonly used swear words of a more benign sort.

Example: I often request that marketers refrain from engaging in activity that can be described with two of my favorite altered terms, jackassery and asshattery.

I’ve never been told by any of my readers, in private or in public, that my explicit language offends them.

Not Swearing? How, Then, Can Explicit Content Be Offensive?

This is just my best guess, I don’t have any metrics to back it up, but … I think people are offended when someone strongly, assertively, and without pulling the punches discusses the negative impact of an action or activity that the reader embraces as standard operating procedure.

This goes back to the definition of explicit shared above. When your content is direct, to the point and implies anything negative, people start to think you’re writing about them personally. No matter how careful you are to call out actions, rather than individuals.

That leads me to think that these people feel somewhat guilty for their actions, but again, that’s just my personal take.

So, after looking carefully at the definition(s) of the term, I will continue to adhere to my explicit content policy in 2015 and beyond. My new podcast, Ready, Set … Podcast, will have an explicit rating, because both my partner Brooke Ballard and I will occasionally use explicit language to make a point. Not because we think it’s cool, or because we want to be edgy.

We use the language we use because it’s real and authentic and that’s how we actually speak.

And my blog posts going forward? Same explicit content style. No ambiguity about what I think or the ideas I share.

Let’s lose the idea that explicit is simply the opening up and expelling of swear words. It’s a lot more than language that would have earned you a mouth washed out with soap as a child.

Does explicit language, used well with the proper intent and purpose, bother you? Chime in with a comment!

When Social Media Starts To Smell Not So Fresh!